ShelterMe is produced and created by Steven Latham. Their mission? To share inspirational stories that celebrate the human-animal bond.

Recently, Kuddly’s CEO and a few members of our Kuddly team visited with Latham at his 7th ShelterMe premier where the series was hosted by Jane Goodall. It featured three amazing stories.  There were shelter dogs transformed into protectors of endangered elephants and rhinos in Africa, a cross country team who runs with dogs during their training sessions and helps to get them adopted, and another group of students in high school who reads to shelter dogs to help them socialize and get adopted too!

The stories are beyond inspiring, moving the audience to tears. We were all quite touched that in our world, each day there’s someone doing something amazing and seeking to help animals in need. 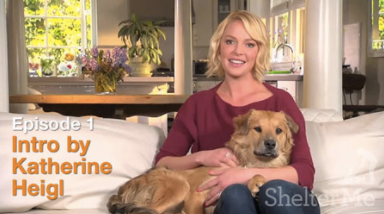 If you want to watch ShelterMe, check out Episode 1 on their page featuring Katherine Heigl . The stories cover female prisoners who train shelter dogs to become service dogs, military veterans who heal from PTSD with the help of their service dogs, and a few dogs who land in their forever homes after life in the shelter.