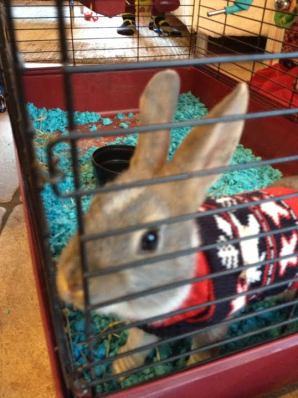 I yelled to my three children, “Wake up it’s Christmas!” in 2014. The kids, two boys and girl, ran downstairs and they spotted an empty cage. My wife and I’d talked about getting a pet, and we’d settled on a rabbit for the kids. They heard us talk about it, and concluded Christmas day was going to be the day they’d get a rabbit. My daughter was disappointed, not to see a bunny on Christmas day. She wasn’t interested in presents, and instead she just sat on the couch until she heard her brothers yelling from the garage, “A bunny!”.   Somehow she came alive in that instant, everyone did. After a while the kids decided to name the rabbit Joy, and soon my wife and I began to discover that this rabbit brought our entire family lots of joy. The kids learned how to care for him, clean his cage and be responsible. However, after several months, my youngest son, who was 4 years old at the time, opened the cage while the front door was open, and Joy hopped out. We spent an entire week looking for Joy at the school, asking teachers and friends, but in our neighborhood so many bunnies were around, and native to the area, so we couldn’t distinguish him from the rest. Yet somehow my daughter, handled the situation well, she even helped me write this story. As far as her ending goes, even though it was really sad for her, she would say she, “learned to let go.”  – Eric, Finance