A few years back if someone were to tell me they had studied their pet’s poop habits I would have been pretty freaked out to say the least.  Weirdos!  I mean really, who studies their cat’s poop?

My wife and I brought Floyd home on a nice Saturday.  We had everything ready to welcome him to our family.  He was a 4 month old Maine Coon Kitten.

And then there was poop

Lots of it.  Messy poop.  Runny poop.  Stinky poop.  After having Floyd for just a couple of days we took a trip to the cat clinic to get an overall exam and figure out what was causing his diarrhea.  The veterinarian sent us home with some supplies and instructions to gather some samples for testing and explained that it could be parasites, stress, change in diet, or many other things.  Turned in the sample and a few days later little Floyd was diagnosed with Giardia, which is an intestinal parasite.  It took a few attempts to get it completely under control but after a solid week (or solid after a week) he was deemed cured.  All other test results came back just fine and we had a healthy little kitty.

And then there was the internet

Wanting to be the best pet owners we could possibly be, we thought we were doing well by switching Floyd over to raw grain free diet.  You know the internet, there’s so many opinions on just about any subject it’s often impossible to figure out what’s a right or wrong approach.  So we served up very expensive dry kibble during the day and frozen raw beef morsels during the evening.  Floyd seemed to like the food and we carried on with this diet for over a year.   Little did we know – the diet we thought was so healthy was actually beginning to cause problems for Floyd

And back to poo

While he grew and grew Floyd was becoming a bit irregular.  Floyd went from a bowel movement a day, to one every other day, and then alarmingly only once every three days.  Worried, we got right on top of the research, vet calls, internet searches, talking with other cat owners in hopes of finding the problem.  We took Floyd to the cat clinic and the first thing the technician noted was that the poop Floyd had made in the travel carrier (he’s scared of car rides) was very hard.  He told us to keep an eye on the situation and assured us that tests concluded Floyd was physically ok.  During my own research into the issue I read many stories about megacolon which also lead me to believe that if so many cases of megacolon exists then there must be a fundamental problem with cat constipation?!  There’s a larger problem which needs to be addressed and I was not satisfied that Floyd was ‘ok’.

And then along came Kuddly

Armed with horrifying stories about Megacolon, intestinal blockage, dehydration, E-Coli infections and Floyd’s irregularity as well as my reluctance to continue using internet search engines I used Kuddly to speak to a veterinarian.  I summarized everything as best as I could, entered all the details and added a profile for Floyd and started my chat with a veterinarian.  Three minutes of setup and I was chatting directly to a really cool veterinarian who helped me quickly sort through all of the variables, gave me some extremely good advice and helped me hatch a plan which ultimately got Floyd back on schedule!  Within 15 minutes I had learned so many things I hadn’t known prior.  I learned about the dangers of raw diets, some of which are bacterial infection such as E-coli or Salmonella (which can easily transfer to owner if dishes are cleaned together), lack of moisture content, and unbalanced minerals and nutrients such as the amino acid Taurine which if deficient can result in blindness.  I was told to actually inspect Floyds stool for any foreign objects which I had previously only given a visual.

Armed with all of this info I immediately did a couple of things which changed everything.  Properly gloved, I carefully inspected a poop and was immediately surprised to discover the poop was about 50% hair.  You couldn’t tell just by looking at it that it was a giant hairball intertwined with Floyd’s stool.  I inspected the next movement and found the same thing!  I then decided to change up Floyd’s diet to a high quality kibble during the day and a high quality (non-raw) canned food in the evening.  I saw an immediate improvement.  One more follow-up with the same Kuddly vet and I had even more information which iced the cake.  The fact that Floyd was an indoor cat and a Maine Coon meant that he really needed some assistance taking care of all of that fur so he didn’t have to lick it all up and digest it!  So I started grooming him for 3-4 minutes every single morning and giving him some morning treats specifically designed for aiding hairball digestion.

With these changes Floyd is now completely regular.  He seems much happier and even quirkier than ever.

In conclusion, I don’t feel the least bit strange that I pay close attention to what comes out of my cat.  After all, they don’t speak our language and can’t tell us if they’re having specific issues.  I love my little Floyd like a child and I know parents of children pay close attention, rightfully so, to everything about their babies.  As a pet owner and more than that as Floyd’s human papa, it’s my responsibility to make sure Floyd is a happy and healthy little fella.  It would be great if Floyd could have told me “Papa can you do me a favor and feed me some more moisture rich food, brush me daily so I don’t have to eat my own hair, and please – don’t feed me that raw meat that you wouldn’t eat yourself”! 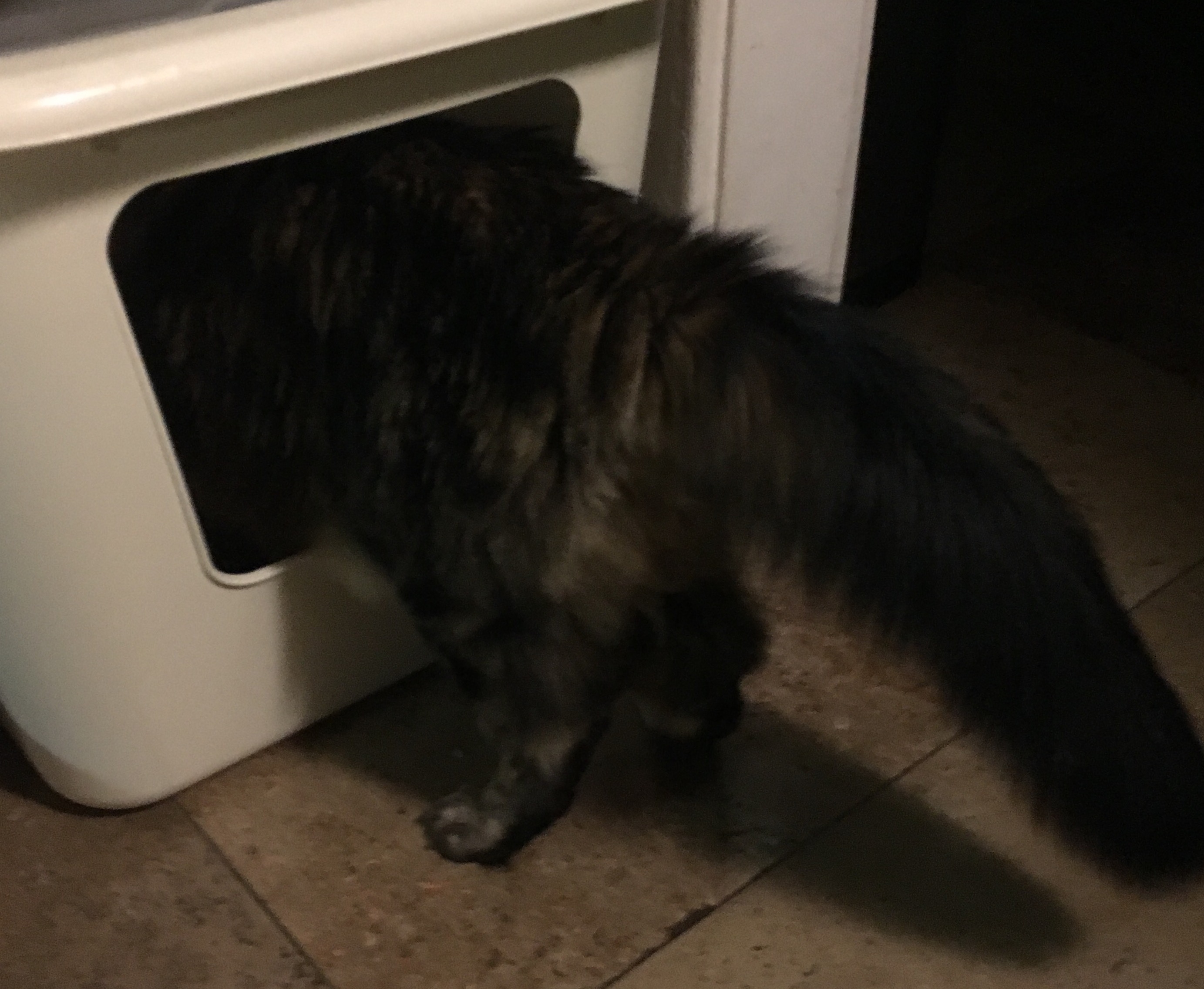